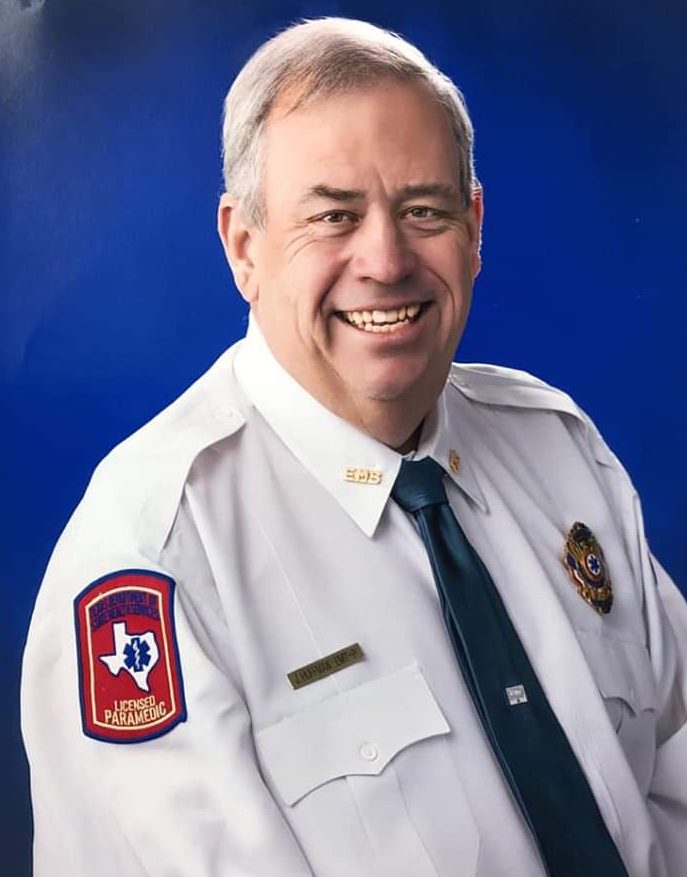 Born August 11, 1954, Mr. Huffman died at his home in Garland  surrounded by his family and friends.

From his funeral service at First United Methodist Church of Richardson, Mr. Huffman was taken by ambulance rather than a hearse to Grove Hill Memorial Park in Dallas,  TX. The funeral procession included 17 ambulances and 14 command vehicles, as well as a police honor guard and other mourners.  Following a rendition of Amazing a Grace on bagpipes, first responders performed The Last Call ceremony.

A licensed paramedic, Mr. Huffman was also active in professional organizations, serving as TAA president two years and on its executive board and as a member many more years.

While president of the Texas Ambulance Association, Mr. Huffman was instrumental in drafting legislation which established standards for Emergency Medical Services in Texas.

Mr. Huffman was also a long-time member of the American Ambulance Association, serving 18 years on the board of directors and as a member for more than 30 years.

At the time of his death Mr. Huffman had been Special Events Coordinator of American Medical Response for 16 years, providing standby service at Cowboy Stadium, AT&T Stadium, the Cotton Bowl, Lone Star Park in Grand Prairie, as well as many others.

Mr. Huffman had worked at the State Fair of Texas First Aid Station for 45 years, never missing a day.  Twenty-three of those years he was director of the station.  He formerly owned Dallas Ambulance for 11 and a half years. Adding these years of service, Mr. Huffman packed 142 ½ years of service into the 64 years and 10 months of his life.

Mr. Huffman graduated from W.W. Samuel High School, attended SMU and earned an A.A. degree at Eastfield Community College. Memoriam gifts may be sent to the Leukemia and Lymphoma Society of North Texas.